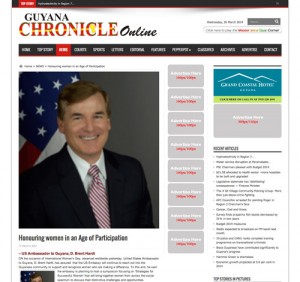 ON the occasion of International Women’s Day, observed worldwide yesterday, United States Ambassador to Guyana, D. Brent Hardt, has assured that the US Embassy will continue to reach out into the Guyanese community to support and recognize women who are making a difference. US Ambassador Brent Hardt. To this end, he said the embassy is planning to host a symposium focusing on ‘Strategies for Successful Women’ that will bring together women from across the social spectrum to discuss their distinctive challenges and opportunities.

Ambassador Hardt likened women to “a cornerstone of America’s foreign policy, because the simple fact is that no country can hope to move ahead if it is leaving half of its people behind.
“Women and girls drive our economies.

They build peace and prosperity,” he said, noting that investing in women means investing in global economic progress, political stability, and greater prosperity for everyone.
“As we honour women of courage, let us renew our resolve to work for the cause of equality each and every day of the year,” he added.

Referring to remarks by Secretary of State Hillary Clinton, the Ambassador said they have particular resonance as people around the world celebrate International Women’s Day and continue to make strides for women’s progress.

Ambassador Hardt recalled too, that in December, President Obama released the first-ever U.S. National Action Plan on Women, Peace, and Security, charting a roadmap for how the United States will accelerate and institutionalize efforts across the government to advance women’s participation in preventing conflict and keeping peace.

This initiative, he said, “represents a fundamental change in how the United States will approach its diplomatic, military, and development-based support to women in areas of conflict, by ensuring that their perspectives and considerations of gender are woven into the fabric of how the United States approaches peace processes, conflict prevention and the protection of civilians.

The US Embassy also sought to participate in non-governmental initiatives such as the “Witness Project,” launched by the Margaret Clemons Foundation that used photography of eyes of children and the faces of Guyanese from all walks of life to spark a nationwide discussion on domestic violence and how to reduce its incidence.”

« U.S. Embassy Participates in WITNESS Project Roll Out
Caught in the crossfire »