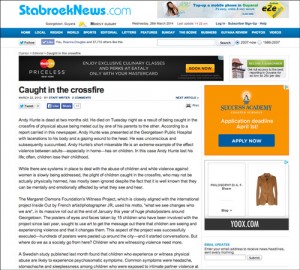 Andy Hunte is dead at two months old. He died on Tuesday night as a result of being caught in the crossfire of physical abuse being meted out by one of his parents to the other. According to a report carried in this newspaper, Andy Hunte was presented at the Georgetown Public Hospital with lacerations to his body and a gaping wound to the head. He was unconscious and subsequently succumbed. Andy Hunte’s short miserable life is an extreme example of the effect violence between adults—especially in home—has on children. In this case Andy Hunte lost his life; often, children lose their childhood.

While there are systems in place to deal with the abuse of children and while violence against women is slowly being addressed, the plight of children caught in the crossfire, who may not be actually physically harmed, has mostly been ignored despite the fact that it is well known that they can be mentally and emotionally affected by what they see and hear.

The Margaret Clemons Foundation’s Witness Project, which is closely aligned with the international project Inside Out by French artist/photographer JR, used his motto, “what we see changes who we are”, in its massive roll out at the end of January this year of huge photo/posters around Georgetown. The posters of eyes and faces taken by 15 children who have been involved with the project since last year, sought to use art to get the message out there that children are seeing and experiencing violence and that it changes them. This aspect of the project was successfully executed—hundreds of posters were pasted up around the city—and it started conversations. But where do we as a society go from here? Children who are witnessing violence need more.