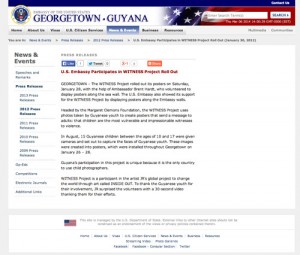 Headed by the Margaret Clemons Foundation, the WITNESS Project uses photos taken by Guyanese youth to create posters that send a message to adults: that children are the most vulnerable and impressionable witnesses to violence.

In August, 15 Guyanese children between the ages of 10 and 17 were given cameras and set out to capture the faces of Guyanese youth. These images were created into posters, which were installed throughout Georgetown on January 26 – 28.

Guyana’s participation in this project is unique because it is the only country to use child photographers.

WITNESS Project is a participant in the artist JR’s global project to change the world through art called INSIDE OUT. To thank the Guyanese youth for their involvement, JR surprised the volunteers with a 30-second video thanking them for their efforts.

« Witness Project on efforts against gender- based, child- directed violence rolled off.
Honouring women in an Age of Participation »