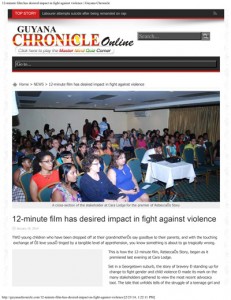 TWO young children who have been dropped off at their grandmother’s say goodbye to their parents, and with the touching exchange of ‘I love yous’ tinged by a tangible level of apprehension, you know something is about to go tragically wrong.

This is how the 12-minute film, Rebecca’s Story, began as it premiered last evening at Cara Lodge.

Set in a Georgetown suburb, the story of bravery – standing up for change to fight gender and child violence – made its mark on the many stakeholders gathered to view the most recent advocacy tool. The tale that unfolds tells of the struggle of a teenage girl and her young brother, two orphans, now permanent guests of their grandmother, who is an alcoholic with a violent streak.

The children endure physical and verbal abuse at her hands until a neighbour, a young boy, takes notice. Bravely, he uses an educational opportunity, an invitation to a reading class, as a means to bring some change to the children’s lives.