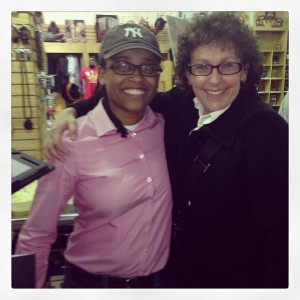 Recently, we submitted our film, Rebecca’s Story, to the Caribbean Film Academy in Brooklyn and our film was shown on Friday night last week. This was a very interesting event and it reminded me of how I imagine the “beatnik” era here in the NYC underground in the 1950’s and 60’s. The theatre was set up in a storefront. There were 30 or 35 people in attendance, mostly Guyanese and they were interested, vocal and plugged into Guyana and what’s happening there. There was a journalist attending as well. She conducted interviews and tape recorded them.

A number of films were presented, short films and one music video. The longest film was “Tin City”, an expose about life in Tiger Bay. After each film was shown discussions ensued about the films.

The response to Rebecca’s Story was quite warm. Everyone loved it! I noticed something while the film was showing…people warmed with the jungle river scenes and also the street scenes. Some smiled and nodded as they recognized the familiar sites, the streets and houses on the block. They seemed to be interested in the scene where Rebecca is in the kitchen spreading margarine on the bread…there were smiles and some heads nodding there.

I spoke with a number of people after the films were done showing. They were really amazed that the film was adapted by our group of young people, from a story written by one of them, filmed by them, sound, lights, make up, costumes and the whole bit by our youth. They were surprised that we could have made such a beautiful meaningful little film.

This was our first film showing here in NYC. We are in the process of entering, and we have already submitted the film at a number of film festivals including the Trinidad & Tobago Film Festival which is the largest one in the region. But we are submitting to a number of festivals including here in the state and others in the Caribbean. We are in discussions with the Education Channel in Guyana and we do expect to be shown on that channel.