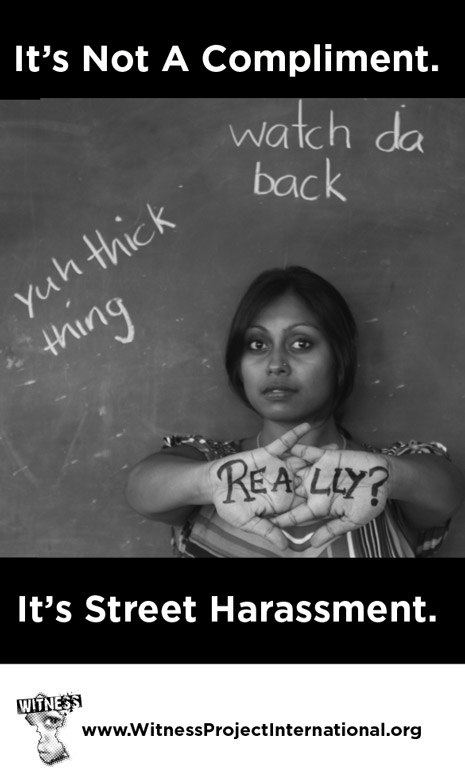 My name is Rosheni Takechandra. I am a woman, a sister, a friend, an auntie, a colleague and the programme director for the WITNESS Project.

That Street Harassment constitutes those unwanted and vile behaviours that starts with thoughts and desires and then manifests into cat calls, whistling, name calling and leading to stalking, following women around, verbal abuse, cursing and threats and even further expressions of sexual abuse like rubbing the male private part against another person, rape etc. – makes it a concern for a society that strives to bring about equality of men and women and peace.

I have been harassed many times by men and boys. Some of whom could be my brother and others old enough to be my father or grandfather.

Such insolent behaviour which is believed by many to be “desired” or “acceptable” by women and girls- reflects the degradation of morals, values, ethics and strength of a powerful population .

Here’s one of my personal experiences:

This man who was leaning against the pavement and drinking a beer, called out to me. I was not sure what he said initially but then he shouted:

This is a total stranger, so I clearly said no as I continued to my bus park.

He started to follow me… When I realised this I started to walk faster. He also accelerated. I refused to listen to the words spilling out of his mouth…At this point I was drenched in fear. I turned to him and asked him to leave me alone. But he insisted on trying to have a conversation with me, invading my immediate personal space.

Drowning in fear, frustration and discomfort, I turned and ran back where I came from. There were two men talking. One selling a DVD to the other. I interrupted the sale.

” Excuse me sir. Can you kindly ask this man to stop following me and to leave me alone?”

“I asked him to leave me alone but he’s still following me.”

The kind man observed my vulnerability then turned to the harasser:

At that moment the harasser turned to me, gave me a long stare then remarked:

I thanked the kind man and walked away as fast as I could. Perhaps I ran…

No one said anything to that harasser until I ran for help. Did people pass by and notice his behaviour? Yes! Did they intervene? No!

I could not help but to think that because I am a woman my words and decisions are not taken seriously by those harassers… it’s all about their agenda and how they go about executing it. The woman does not exist. She is just the object at his disposal- at least that is how it appears.

Because I am a woman, I must be subjected to that harasser? Really?

I am not unique to such vile behaviours. Other women and girls experience this every day!

That the harasser did not listen to me, but he listened to the man who intervened on my behalf, made me realise the significant role of decent men in standing up to those harassers!

Men can definitely play a role in ensuring that women are treated fairly and with respect. That harasser will go on to harass other women. But if another man stands up to him and then yet another man objects to his behaviour, he will be forced to act differently- If not by will, then by the pressure around him to do differently; to control his words and actions, and to respect others especially women and girls.

I strongly believe that women working together can also teach those men what is and what is not acceptable. We can put up our boundaries and make it known. Even when it is tough and scary, we must still hold on to our standards and values.

It is not an easy one but when men and women start working together, we can and will surely have a safer society. One where the harassers do not have any power! They will be forced to change because men and women alike will no longer accept and condone such lowly behaviour!

Do you have a story to tell? Submit Your Story Here. 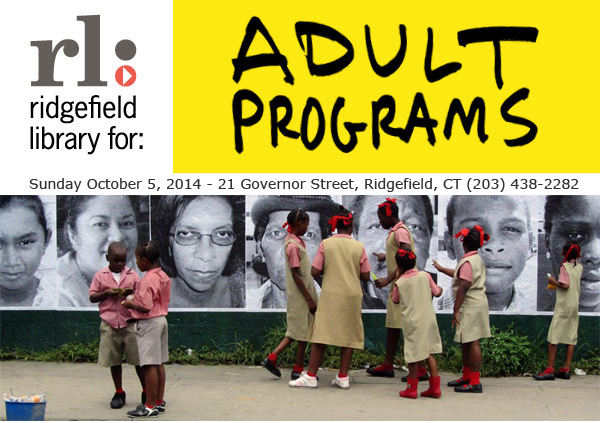 WITNESS Project International will present a talk/screening focusing on our youth’s massive, public space photography project in partnership with French Urban Artist JR’s Inside Out Global Arts Project. Our project generated social awareness and change through the arts, and was followed by other creative public works that used writing, storytelling, and an award winning short film by the WITNESS youth.

Anyone near Ridgefield Conn U.S. tomorrow, Oct 5th, stop by the Ridgefield Library @ 2:00pm to hear about our collaboration with JR/Inside Out  – and see our award winning short film ‘Rebecca’s Story’ – here’s a link to the trailer.
For more information & directions to the Library go HERE.