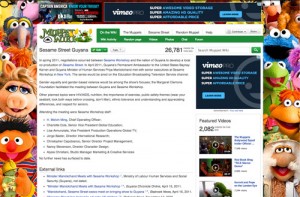 In spring 2011, negotiations occurred between Sesame Workshop and the nation of Guyana to develop a local co-production of Sesame Street. In April 2011, Guyana’s Permanent Ambassador to the United States Bayney Karran and Guyana Minister of Human Services Priya Manickchand met with senior executives at Sesame Workshop in New York. The series would be aired on the Education Broadcasting Television Service channel.

Gender equality and gender-based violence would be among the show’s focuses; the Margaret Clemons Foundation facilitated the meeting between Guyana and Sesame Workshop.

Other planned topics were HIV/AIDS, nutrition, the importance of exercise, public safety themes (wear your seatbelt, look both ways before crossing, don’t litter), ethnic tolerance and understanding and appreciating differences, and respect for seniors.

No further news has surfaced to date.