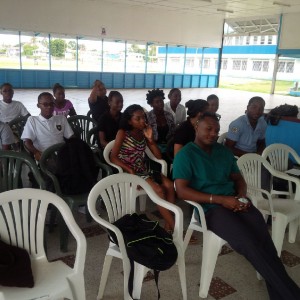 ‎A beautiful afternoon well spent with the members of Come Alive Network, where the screening of our award wining short film was done. The members were welcoming and open to new ideas of spreading our message and building awareness in using the arts. As noted, the film has a kit of questions it comes with, thus this is where the good part began. After the screening, we indulged in discussions relating to what it meant being a Witness; for one of the member stated:

‘One major thing I enjoyed about this film is that it speaks about real issues that are facing everybody everyday and you don’t have to be an adult to understand these issues, the film portrayed it well’ – CANI Member

It was a genuine film, genuine in that it was totally a Guyanese film‎, it wasn’t cliché but it was well made and I enjoyed it’- CANI Member

All in all, sharing out film and spreading our ideals with the members of Come Alive Network was ‎a memorable event for I know that networks were build and it enforced the plight of reducing this plague of Domestic and Child Directed Violence that our society has been faced with.