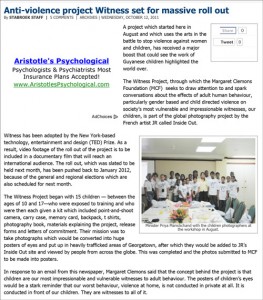 A project which started here in August and which uses the arts in the battle to stop violence against women and children, has received a major boost that could see the work of Guyanese children highlighted the world over.

The Witness Project, through which the Margaret Clemons Foundation (MCF) seeks to draw attention to and spark conversations about the effects of adult human behaviour, particularly gender based and child directed violence on society’s most vulnerable and impressionable witnesses, our children, is part of the global photography project by the French artist JR called Inside Out.

Witness has been adopted by the New York-based technology, entertainment and design (TED) Prize. As a result, video footage of the roll out of the project is to be included in a documentary film that will reach an international audience. The roll out, which was slated to be held next month, has been pushed back to January 2012, because of the general and regional elections which are also scheduled for next month.